2018 has been a good year for Adam Smith. After saying goodbye to his band, Speaking in Shadows, following eight successful years of song-writing and crowd-surfing, he put pen to paper for a different reason: to write poetry again. Since rekindling his love for poetry and spoken word, Adam has spent 2018 scorching across the Midlands, meeting like-minded wordsmiths and honing his craft and style at open mic nights wherever they’d take him. Along the way, he has performed several headline poetry gigs, featured as part of local festivals, starred on the Brum Radio Poets programme and even led a session on the importance of storytelling at his work’s annual conference.

We caught up with Adam after he headlined at Fire & Dust in September, to find out more about him and his work… 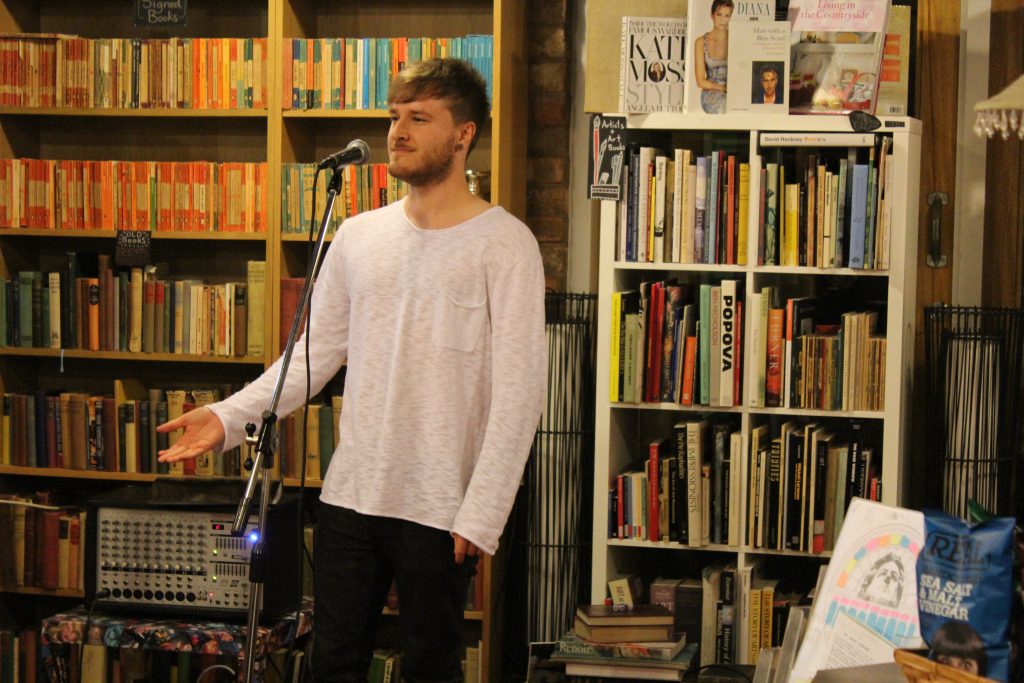 How long have you been writing poetry, and what got you into it?

I’ve always loved stories and I’ve written them for as long as I can remember, but my love for poetry came a little later. I was part of a Creative Writing enrichment group during my two years at sixth form, and that’s when I really started to play around with words and rhythms for the first time. I became really interested in the sounds and cadences you could create, and found the brevity that comes with the form refreshing after so long only writing stories.

Are there any recurring themes or topics in your work?

I find that I often use poetry and writing in general to express my gratitude and adoration for people, places and experiences that I’m otherwise unable to articulate or convey my appreciation for initially. You’ll find a lot of reference to those kinds of things, I think.

I also find poetry – especially spoken word and slam poetry – a perfect platform for alleviating my annoyances and disappointments with the world around me. Don’t get me wrong, the world can be the most magical and magnificent of places, but I’m often shocked and saddened by the things I see and hear; it’s good to have a place where I can go to rid myself of those types of grievances.

We’re aware you’re not exclusively a poet – for instance, you write fiction. Do you find that working with different forms benefits your craft, or is it a struggle?

I feel like broadening any craft or skill by exploring all of the different corridors and cubbyholes brings about benefits: language in all of its forms has forever been our tool for storytelling, and I don’t think there’s any one method that’s the best or right way to tell our tales.

Writing fiction has maintained my imagination, which is key to creating new, fresh imagery for my poetry, and writing lyrics previously has given me a much greater grasp of how to snag someone’s attention and then captivate them thereafter. I feel like poetry and song are still so closely connected, even though poetry has arguably angled itself further from its musical origins nowadays – there’s an intrinsic musicality and melody in all poetry, I feel, even when it’s trying its hardest to get away from those roots and rhythms.

How often do you write, and do you have a regular routine?

Not as often as I’d like (but I’m not sure I’ll ever feel like I put enough of my time into writing!).

I find I usually write very late at night and refuse to go to bed until I’ve got a solid first draft of my piece or poem in place – which is definitely not a routine or ritual I’d recommend!!! There’s something about the night that just unfurls my creative cocoon and inspires me to see what my writerly wings can do. 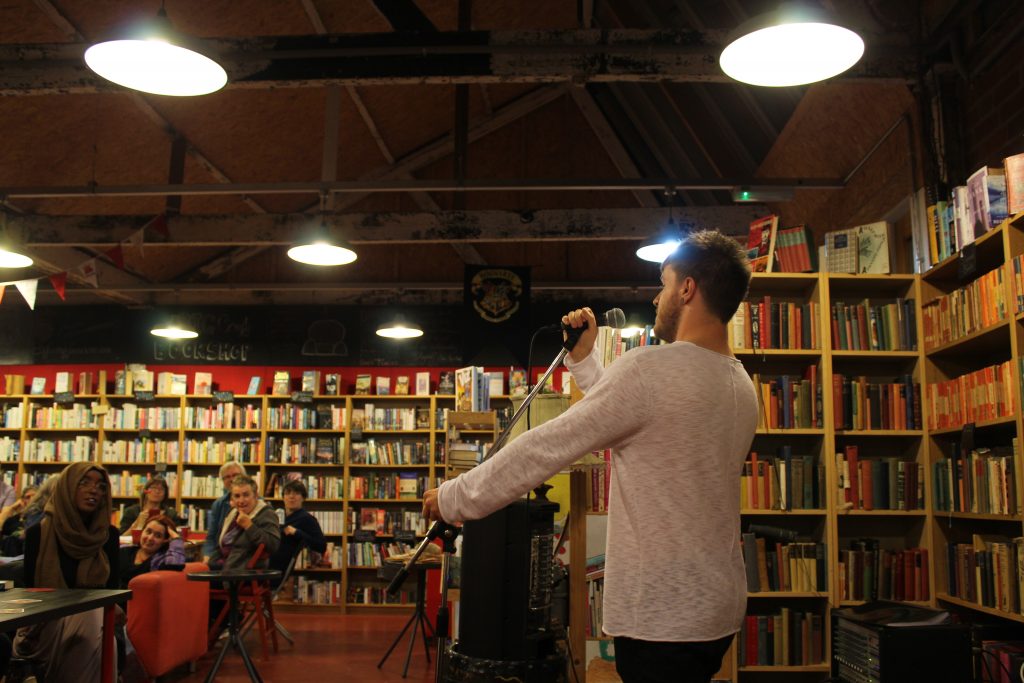 You come across as a very confident performer…but do you get nervous? Any tips for open mic newbies, for how to calm the nerves and command a room’s attention?

I’d love to say that my confidence is steadfast, but I’d be such a liar if I claimed I didn’t get nervous! No matter how many times I get up behind a microphone or out in front of a crowd, there’s a tingle of trepidation at the very least: some primitive pang of discomfort that all is about to go terribly wrong and I’ll never live the embarrassment down. Truthfully though, most people are kind-hearted and want you to do well, so I try to remember that and get rolling.

I think everyone calms their nerves in different ways (though a stiff whisky seems to have a universal euphoria about it!), but as far as securing the room’s attention goes, I think it comes down to being observant and never taking their concentration for granted. During my years as a frontman and singer, I learnt the importance of never being too predictable and varying styles and tempos of the setlist. Poetry is much the same: engage the crowd, speak to them, perform; fluctuate poem order, length and subject matter. It’s all about balance, and it’s important to remember you’ll never please everyone – being yourself and doing what feels right for you is the best foundation for anyone.

Audiences are always impressed by your ability to perform lengthier poems from memory – does it take a lot of practice?

Oh yes… so much practice! I record myself reading the poems, then break that track down into shorter segments and play them over and over and over again in my car on the way to work and back. The mind is a mysterious maze of mush, but it seems pretty sponge-like when it comes to repetition. I find, eventually, it’s like muscle-memory and the words come automatically.

Who are some of your favourite writers, and have these had any influence on your own work?

I have such admiration for so many writers, and for such differing reasons: F. Scott Fitzgerald had a command of words similar only to a tremendous artist and her paints, crafting awe-inspiring sentences and stories like they were visual artworks; but then I also really love Martin Amis or Stephen King for their outright dexterity to spin a decent yarn. I’d like to think I land somewhere in-between: a storyteller with splatters of colour and beauty blotched about the place.

As for poets, there are too many to mention. I’m not one to read an entire poet’s works from cover to cover, as it’s usually one or two of their poems that really resonate with me.

Have you ever had to teach poetry in school?

I actually used to be an A-level English and Creative Writing teacher, so I’ve had my fair share of teaching poetry at my college. As is expected with poetry, it’s for some and definitely not for others – but that’s not helped by the curriculum, if you ask me. We’re still teaching antiquated poetry to a hypermodern classroom of teenagers, and neither the subject matter nor the old forms or metres are making the same kind of impact they once did.

I think if we were allowed to teach poetry as it is nowadays – a megaphone of multicultural musing, moanings and meanings that often knows the rules but relishes in rewriting them – we would captivate the kids far more profoundly than we are doing now. The classics could come later, when there would be a genuine appreciation for the craft and origins of it all. 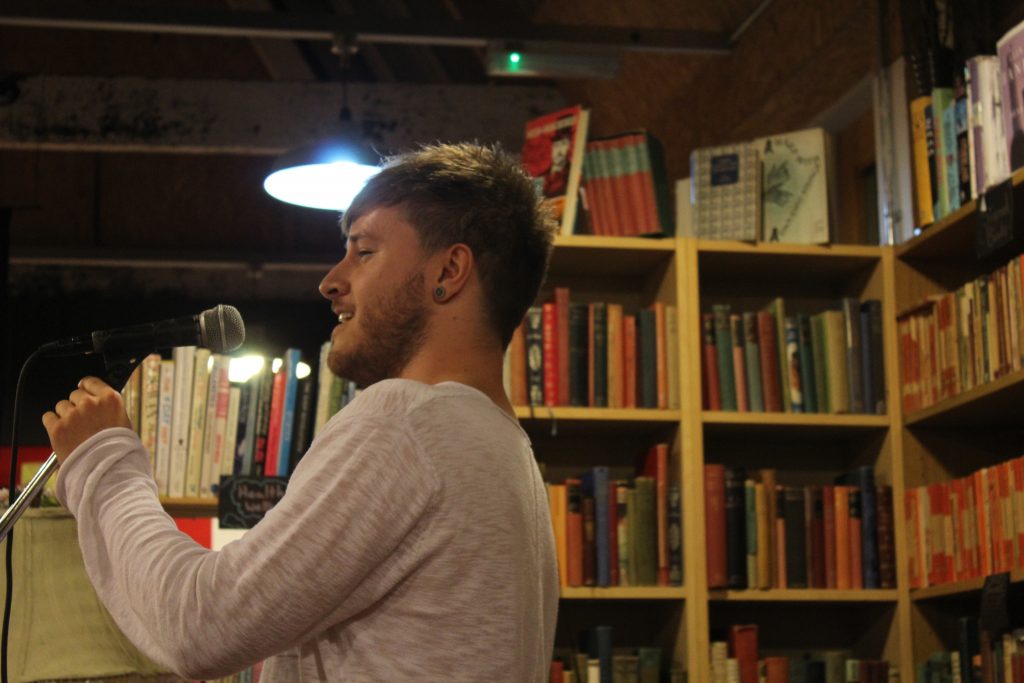 In your own words, what can people expect to experience at an Adam Smith poetry gig?

People can expect a full-body experience: I’m not one to read from the page, because I feel there’s no better way to engage than to throw my whole being into the delivery of my poetry; I like to gesticulate, to shout and scream if need be. As for my poetry itself, I think people can expect a cocktail of crashing emotions and careful observations – and conversation. I’m not one to stand up on stage and not interact: making friends and memories is just as important to me as sharing my spoken word.

Got any performances or projects coming up in the near future?

I’m actually taking some time out to write some new poetry and record more poetry videos for my social media channels. I’ve neglected it all a bit since I’ve been so busy out on the road, so it’s time to get back behind the keyboard and create.

Here’s space to plug some social media or other links: 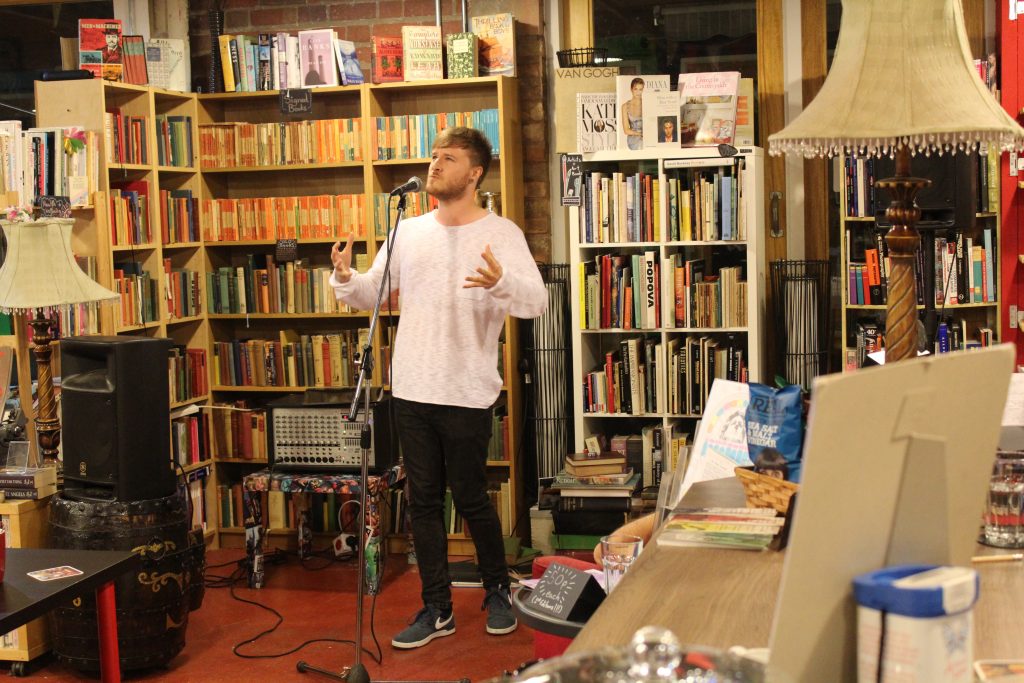